You can find here practical information addressed to farmers, advisors, students and researchers.

This page will be updated on a recurring basis. Please visit this page regularly. 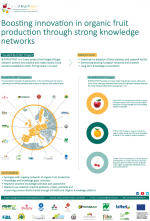 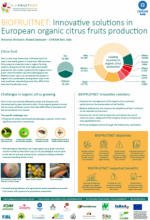 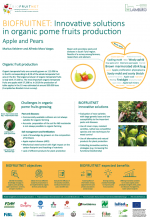 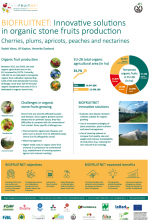 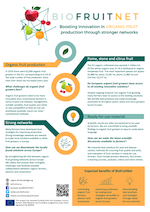 SURVEYS ON NEEDS, GAPS AND PRACTICES

A survey was conducted by BIOFRUITNET’ partners in order to identify the needs, the gaps and the practices in organic fruit production of pome fruits, stone fruits and citrus in Europe. The questionnaire was focused on plant health, functional biodiversity, soil and fertilization, varieties and rootstocks.

From June to November 2021, 149 fruit growers and 100 technical advisors were surveyed in a total of 26 countries. 9 countries represent 80% of the respondents: Italy, France, Spain, Germany, Poland, Czech Republic, Austria, The Netherlands and Switzerland. 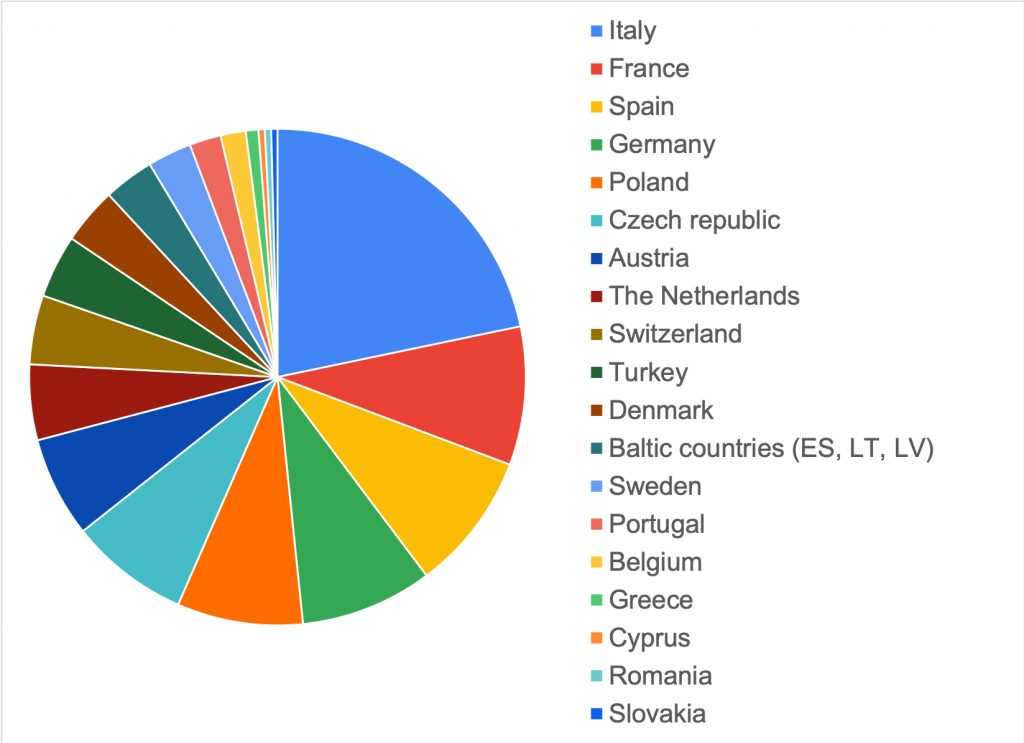 Graph: Origin of the respondents (%) 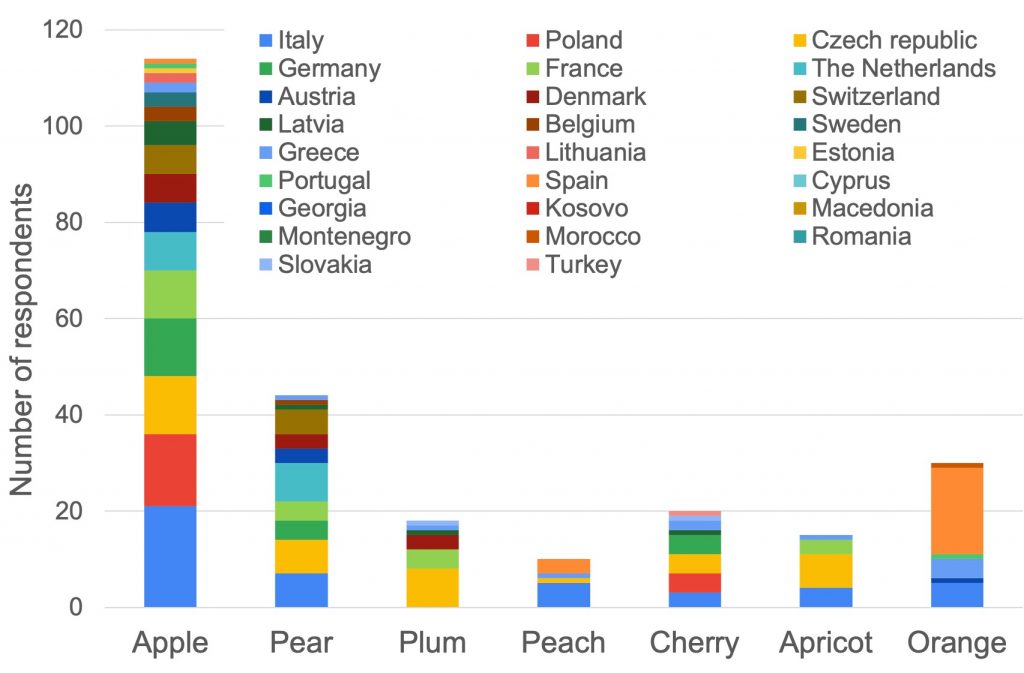 Table: Number of responses obtained for the 7 questionnaires dealing with a specific fruit species

What media do you search for technical information? 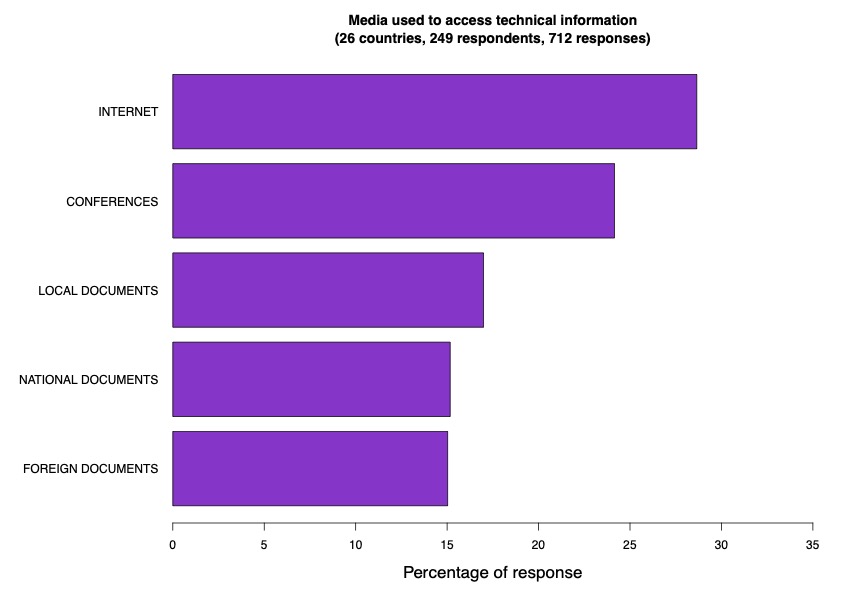 Among the media used to search for technical information, Internet is the most preferred tool, followed by conferences or documents in paper format. The written press in a foreign language is the least popular. The differences between countries provide interesting signposts: in countries where ‘Foreign documents’ represent less than 10% (Spain, Latvia, The Netherlands, Poland, Portugal, Sweden, Turkey), particular attention must be paid to the translation and/or accessibility of the documents produced, for example.

What are important interactive ways to get technical information? 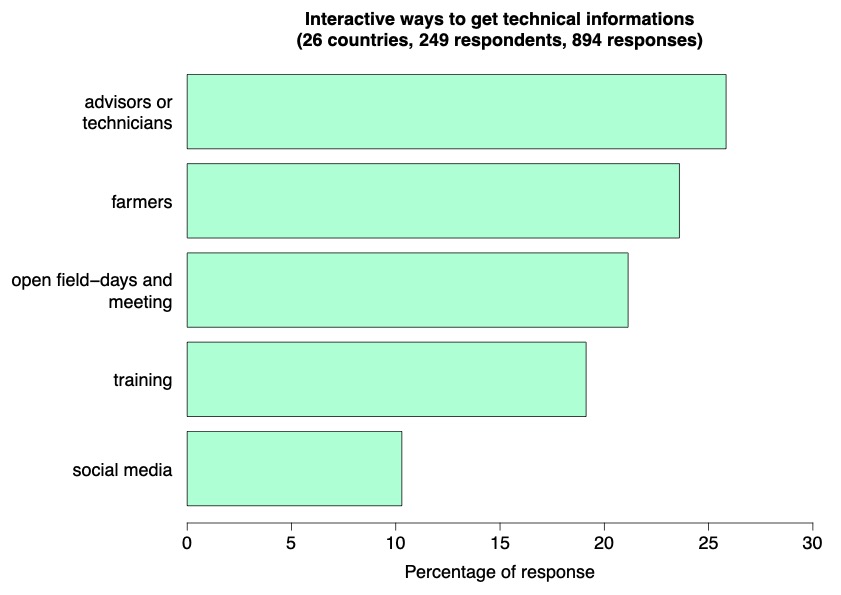 Among the interactive ways of getting technical information, the exchange with an advisor or technician is the most frequent, followed by the exchange between farmers, open-field-days and meeting, and training. Social media are the less mentioned. These results show that the Biofruitnet project will have to carefully consider the target audience of advisors and technicians to enhance the dissemination.

What is your need for technical information? 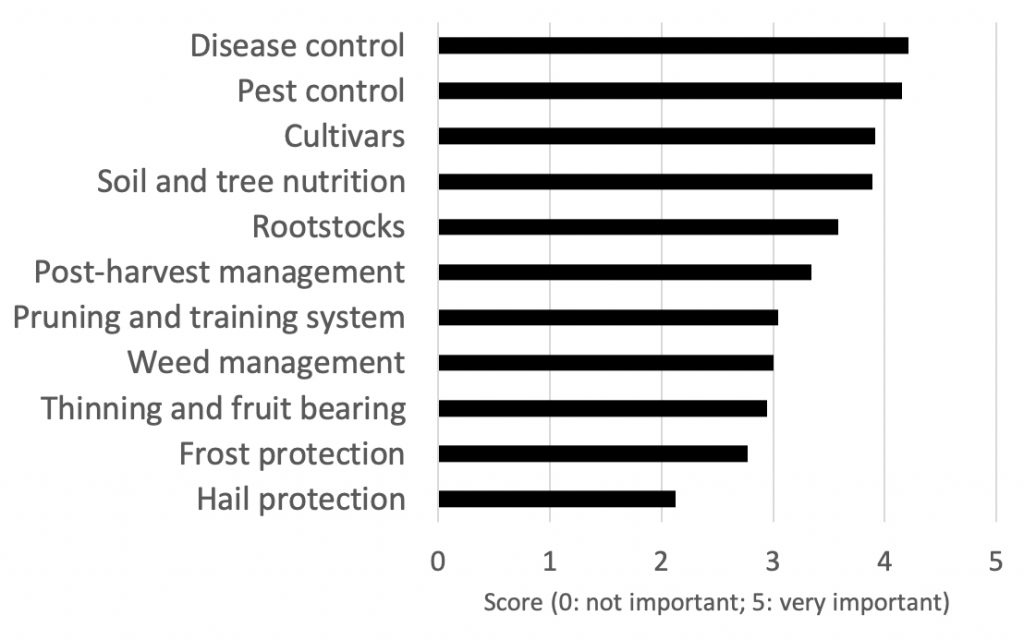 The four topics mentioned as being of greatest concern are disease and pest control, knowledge of varieties and tree and soil nutrition. These topics also appear to be the most important for each fruit species. One small exception is “rootstock”, which appears among the four priority themes for peaches. It should be noted that no answer has an average score of less than 2: as expected, all topics must be well known to successfully manage an orchard!

Data for apricot, peach, plum and cherry were collected from 15, 11, 18 and 20 respondents respectively. The interpretation of the following results should therefore be treated with caution due to the limited sampling for each fruit species.

Which pests are relevant, i.e. currently managed by practices, or not managed but commercially threatening the stone fruits production? 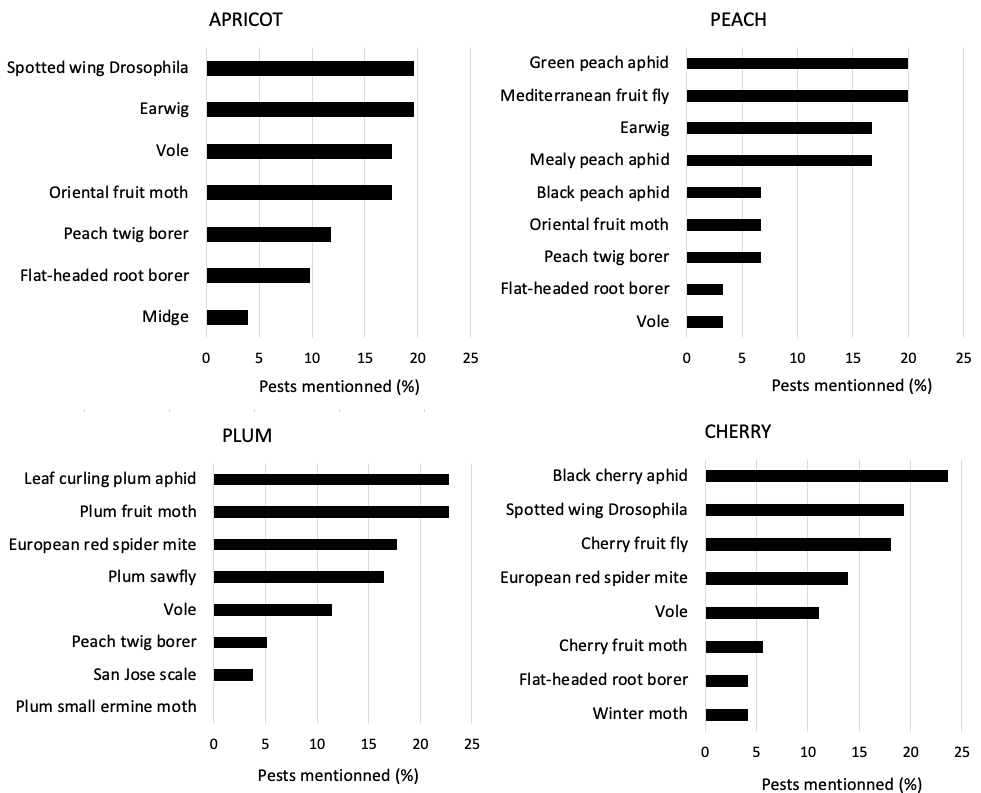 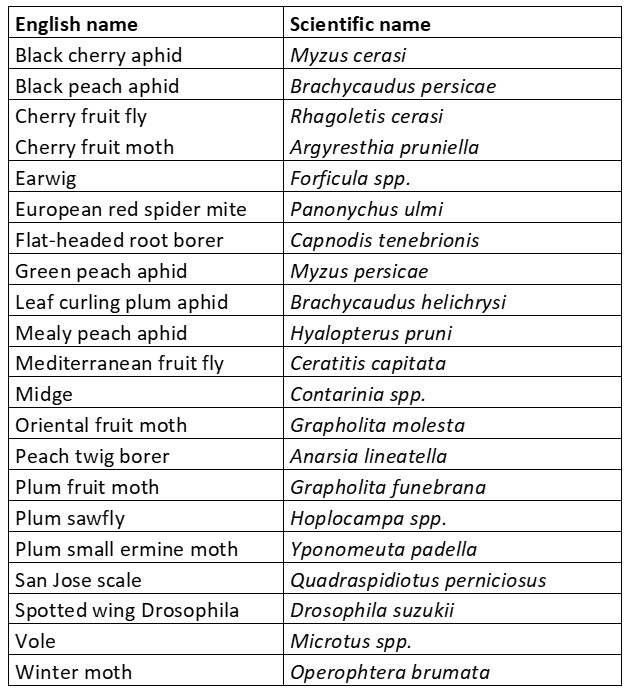 Which pests are relevant, i.e. currently managed by practices, or not managed but commercially threatening the stone fruits production? 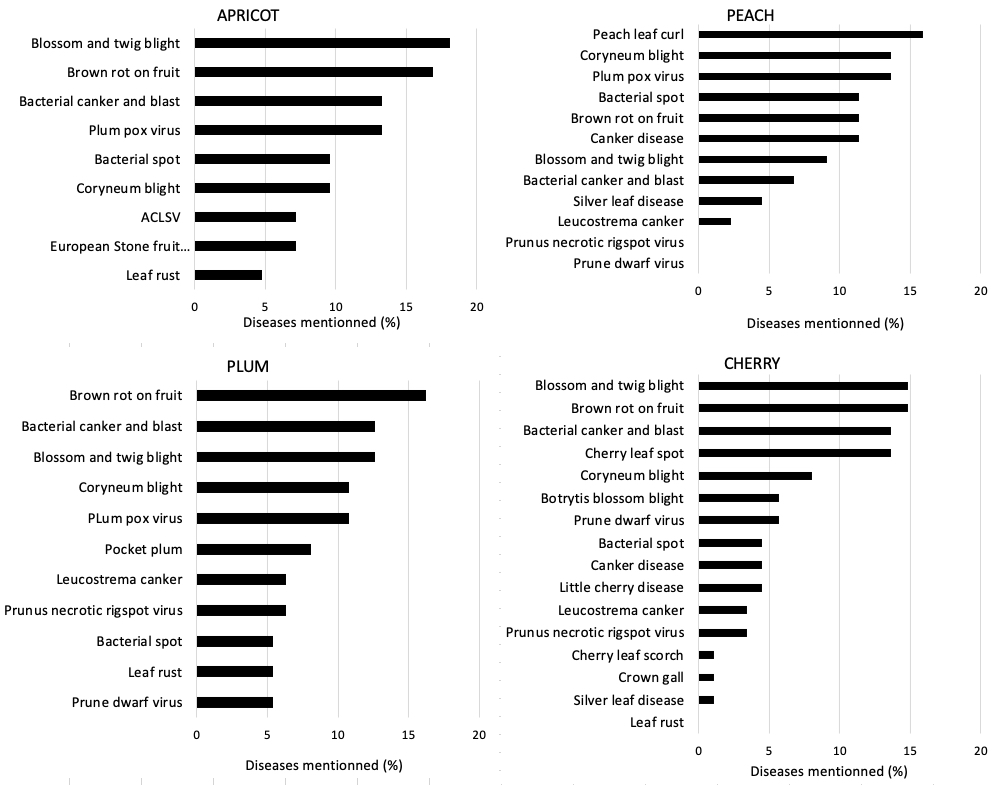 Between 8 and 15 diseases per fruit species were mentioned as relevant by the respondents. Among the diseases most mentioned for the 4 stone fruit species were Monilia spp. on blossoms, twigs and fruits. Bacterial canker diseases are also among the most occurrent diseases of concern.  Virus diseases, especially plum pox virus (Sharka virus), were mentioned on apricot, peach and plum. Leaf rust was mentioned for the three species where it can be a problem (apricot, plum, cherry) at a limited proportion. 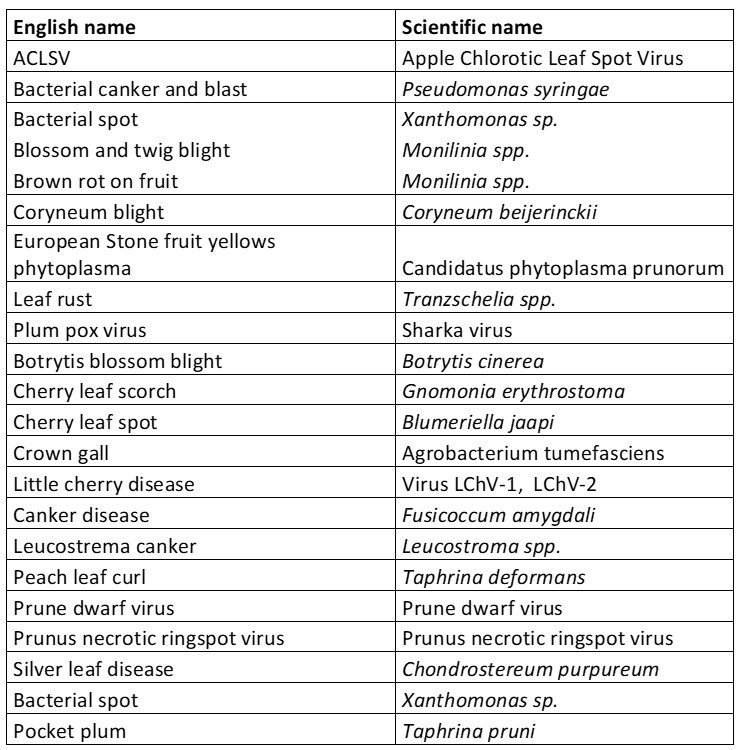 What is the dynamic of these pests in yours stone fruits orchards? 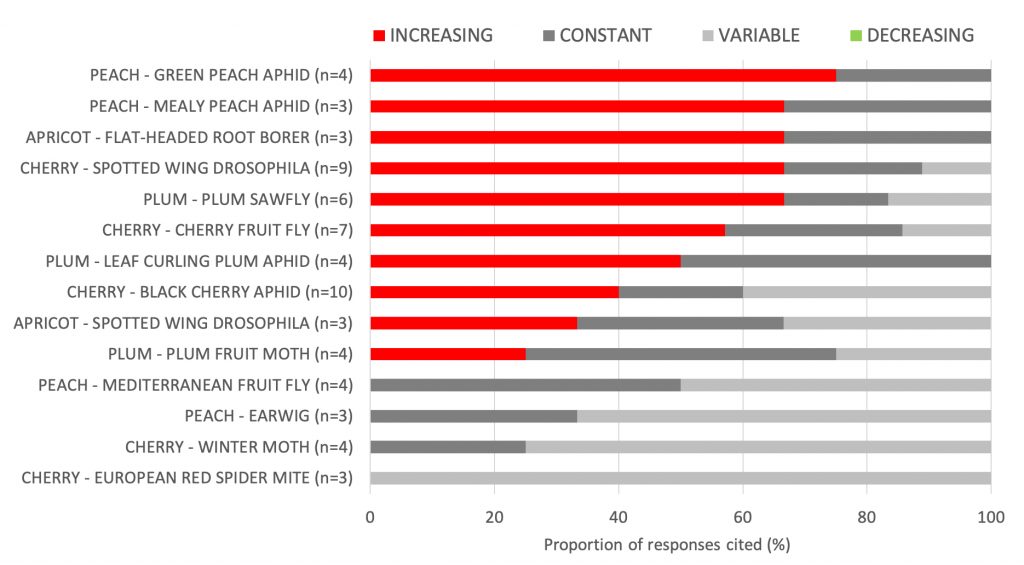 The graphic represents the proportion of responses obtained for each pest. Note: a constant pressure can be both low and high. “n” indicates the number of respondents for a given pest or disease. Only pests with at least 3 responses were considered. Most of the pests mentioned were seen as increasing or constant. Aphids and flies are an important part of the increasing pests. While the increasing pressure in spotted wing Drosophila is well documented, it is less known concerning other flies such as plum sawfly.

What is the dynamic of these diseases in yours stone fruits orchards? 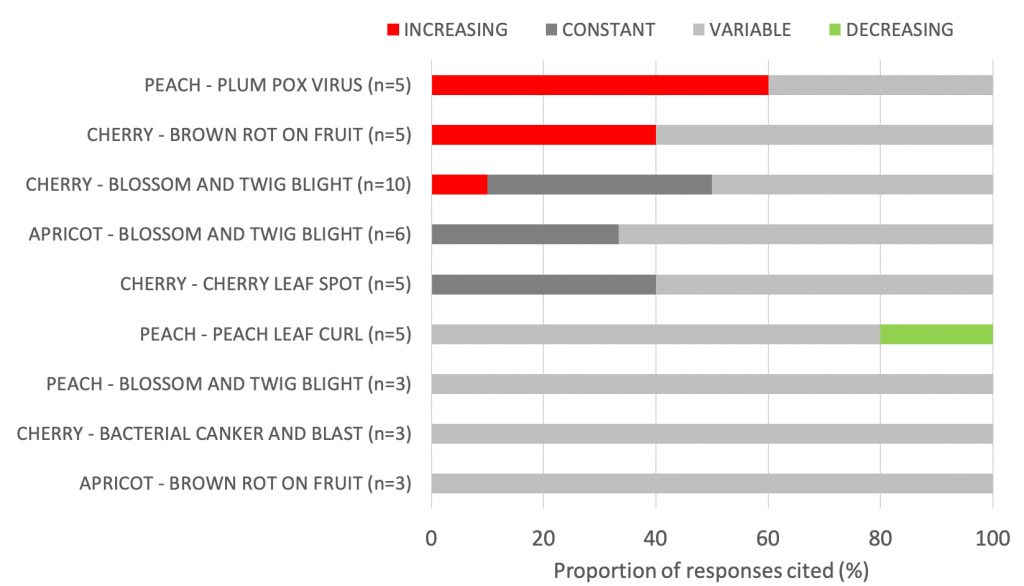 The disease status in stone fruits appears to be mostly variable over time. Plum pox virus being a quarantine disease, the increase of its pressure in orchards is a worrying signal.

How important are the following criteria when planting a new cultivar for stone fruits? 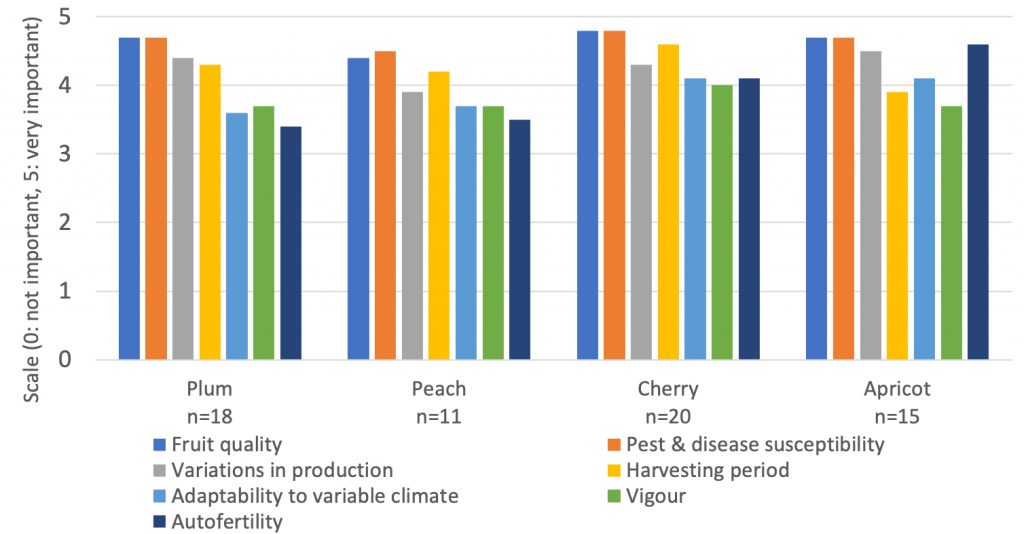 The 64 growers and technical advisors surveyed were asked to rate the importance of criteria for the development and selection of stone fruits cultivars. All the criteria proposed in the questionnaire were considered important since they all obtained an average score of more than 3.5. For the four stone fruits, the most important criteria were fruit quality, pest and disease susceptibility and alternate bearing behaviour. For Apricot, autofertility was mentioned as an important trait.

How important are the following criteria when choosing a new rootstock for stone fruits? 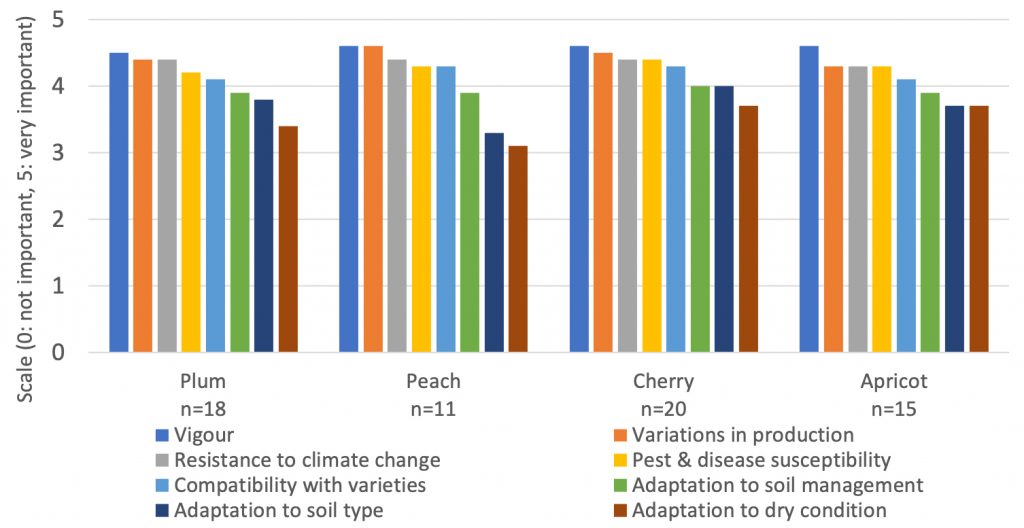 For rootstocks, the 8 criteria proposed were ranked in the same order whatever the stone fruits species considered. As expected, vigour control remains the first priority. Surprisingly, variation of production was mentioned as one of the most important criteria while some species (plum) are naturally more subject to alternate bearing behaviour than others (apricot, peach). Having rootstocks adapted to the future climate appears to be a major criteria.

Data for citrus were collected from 31 respondents in 6 countries. The interpretation of the following results should therefore be treated with caution due to the limited answer. We received 28 responses for orange and 3 for lemon. Due to the similarities between the pests and diseases of these two fruit species, the data have been merged for this topic.

Which pests and diseases are relevant, i.e. currently managed by practices, or not managed but commercially threatening the citrus production? 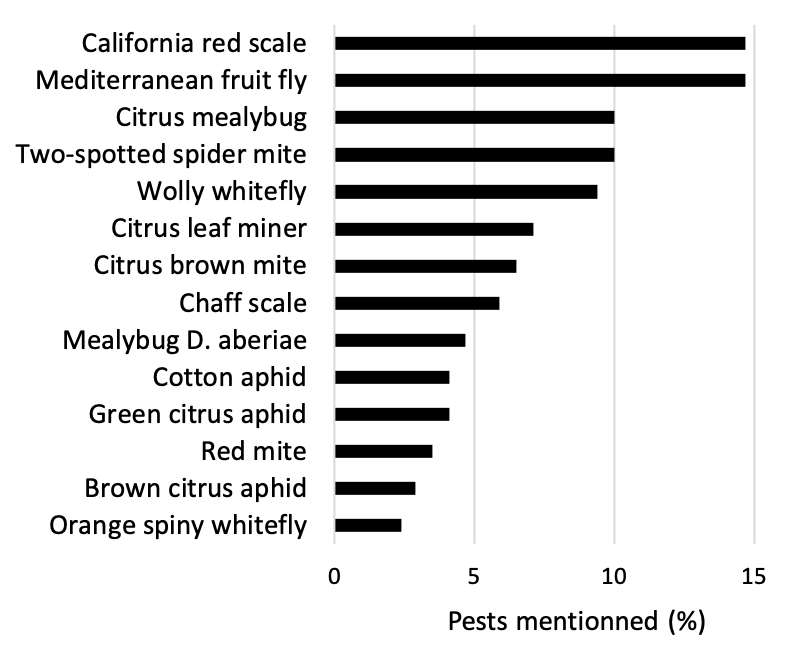 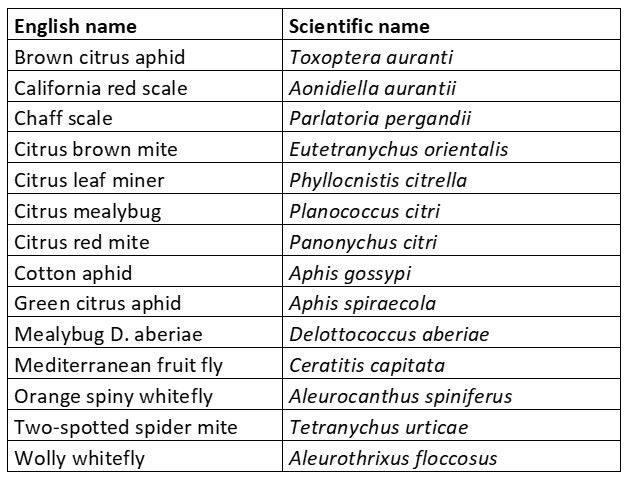 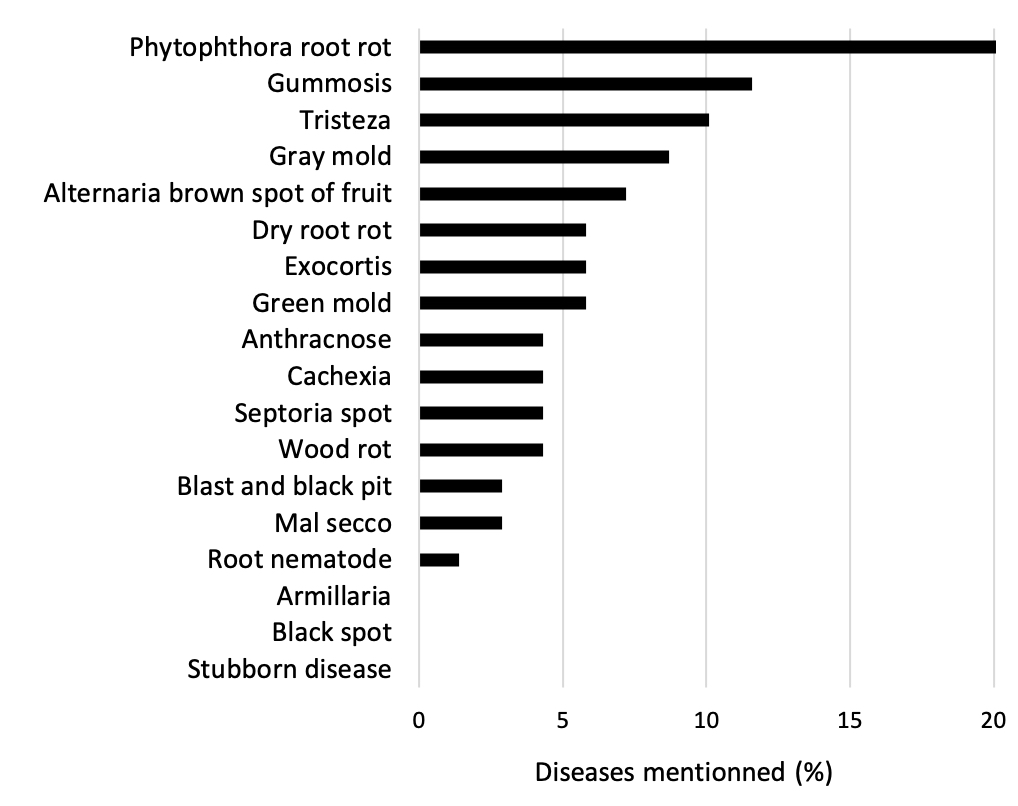 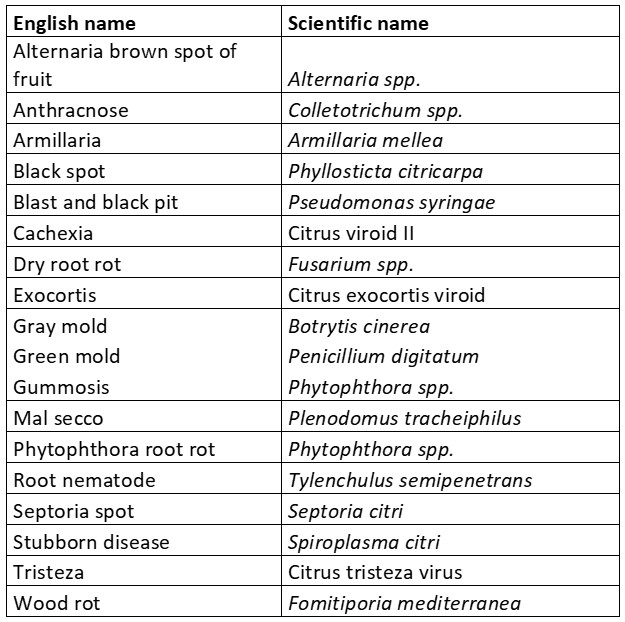 The respondents to this questionnaire highlighted the difficulties encountered to control some pests and diseases as the Californian red scale,  the Mediterranean fruit fly, the Citrus mealybug and the two-spotted mite as pests. Concerning disease control, the most problematic one is Phytophthora, following by Gummosis, Tristeza and Gray mold.

What is the dynamic of these pests and diseases in your citrus orchards? 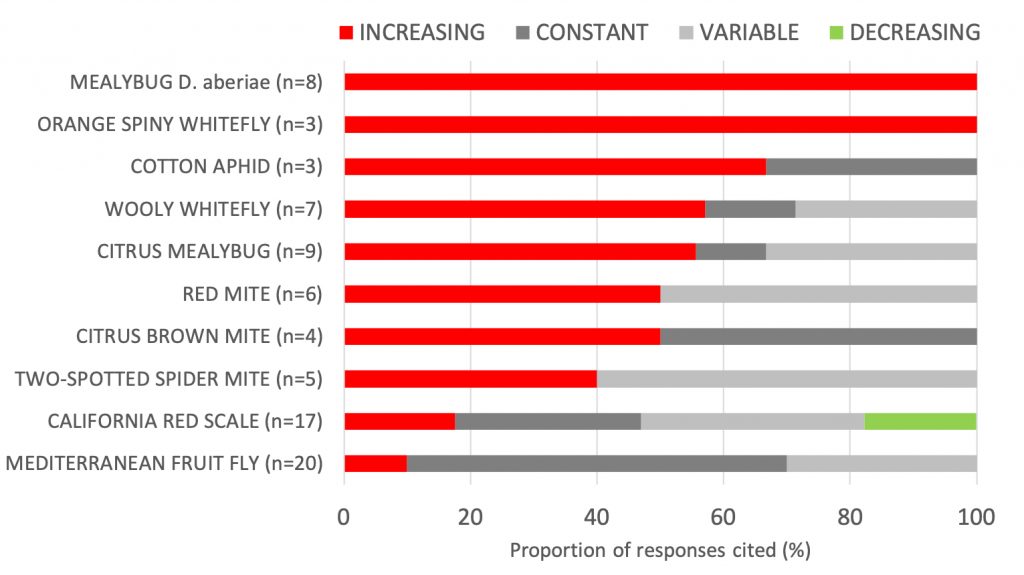 The respondents evidenced particular concerns about the new invasive pests who are seriously threatening the organic citrus production in the Euro-Mediterranean area. In this context, particular emphasis was given to the mealybug Delottococcus aberiae in Spain, the orange spiny whitefly in Italy and Greece, and the Brown citrus aphid in Spain and Portugal. Considering the lack of knowledge on these insect cycles and ecological behavior, technical information for the different control measures is highly requested by the farmers/advisors.

How important are the following criteria when planting a new cultivar or rootstock for orange? 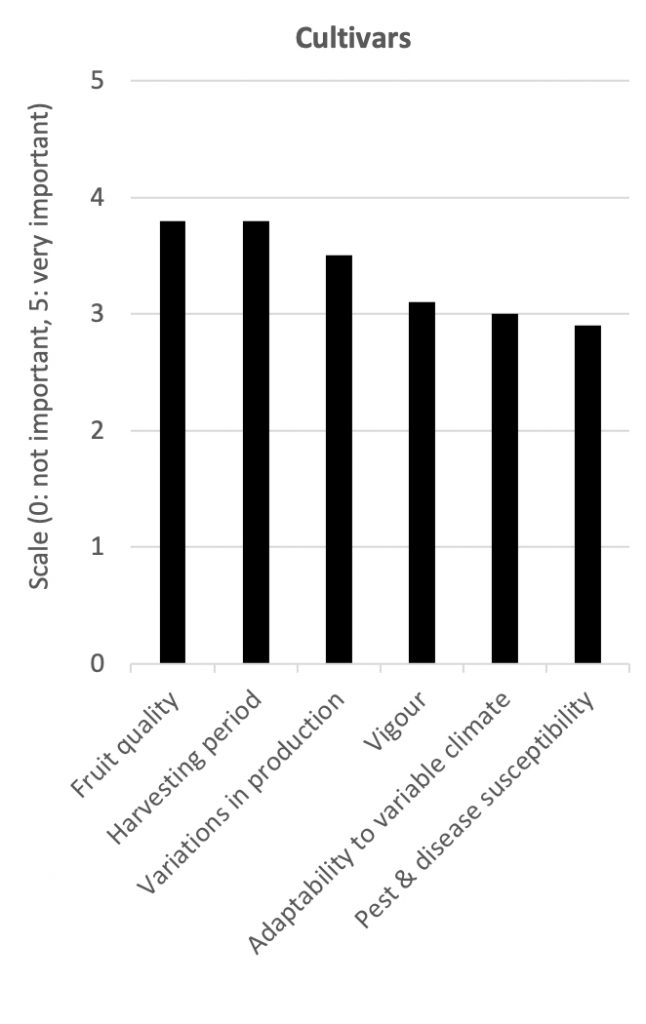 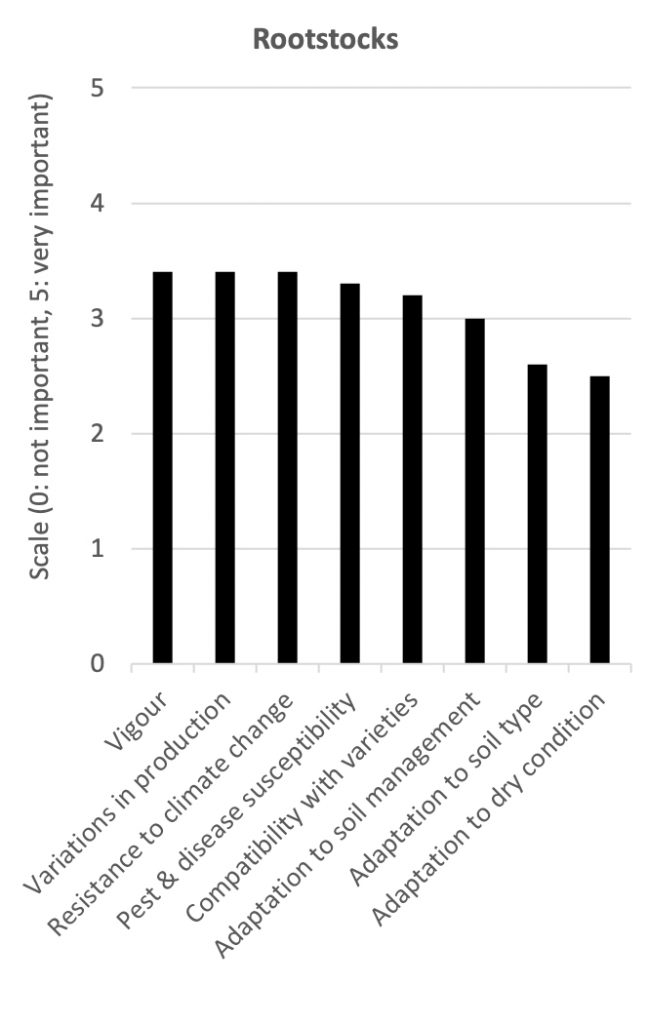 The most important criteria to choose an orange cultivar were fruit quality, harvesting period and alternate bearing behaviour. In contrast to pome and stone fruits, pest and disease susceptibility was mentioned as the less important. For rootstocks, the three main criteria mentioned were the vigour, variations in production and resistance to climate change, at a  same level of importance.

These lists contain the sampling of technical knowledge articles that are considered as the most relevant for farmers and practitioners by BIOFRUITNET partners.

In the project BIOFRUITNET, nine search strings covering stone fruits, pome fruits and citrus fruits, within the selected main topics: pests, plant diseases and plant nutrition were developed, to target the most relevant scientific literature within the topics.

The bibliographic searches were conducted on October 19, 2020 in Web of Science. The databases presented are the complete lists of references included from the WoS search. These lists will be processed to select the most relevant materials ready for practice in a following project work package.

Consult the list scientific articles on organic fruit growing in the following LINK .

Do you what to receive information about the project activities?

This website uses cookies to improve your experience while you navigate through the website. Out of these cookies, the cookies that are categorized as necessary are stored on your browser as they are essential for the working of basic functionalities of the website. We also use third-party cookies that help us analyze and understand how you use this website. These cookies will be stored in your browser only with your consent. You also have the option to opt-out of these cookies. But opting out of some of these cookies may have an effect on your browsing experience. Read more
Necessary Always Enabled
Necessary cookies are absolutely essential for the website to function properly. This category only includes cookies that ensures basic functionalities and security features of the website. These cookies do not store any personal information.
Technical and Functional
Cookies help to perform certain functionalities like sharing the content of the website on social media platforms, collect feedbacks, and other third-party features.
Analytics
Analytical cookies are used to understand how visitors interact with the website. These cookies help provide information on metrics the number of visitors, bounce rate, traffic source, etc.
Marketing
Marketing cookies are used to provide visitors with relevant ads and marketing campaigns. These cookies track visitors across websites and collect information to provide customized ads.
SAVE & ACCEPT
Powered by